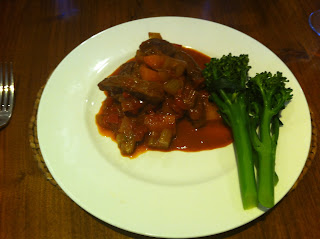 My parents have gone to France for the day leaving me looking after the dog and the house, we are currently living on a building site. My Father has taken four months gardening leave and in that time taken out all the bath rooms in our house and knocked down the kitchen. The Aga is being put into storage on Wednesday leaving us with only a microwave and the barbecue to cook on until september at least. While they are out in between watching wimbledon I am meant to be making supper and using up some eggs that are about to go off. I thought that I would start by using a Jamie Oliver recipe for shin of beef stew as the base for this recipe.

Preheat your oven to 180ºC or in a two door aga on the grid shelf with the grid on the floor of the roasting oven and a cold shelf or if you have longer than three hours you could cook it in the simmering oven. If you are following option two make sure you have brought it to a boil on the top first. Gently fry the onions, carrots, celery, garlic, herbs, porcini and cinnamon for 5 minutes until softened slightly. Meanwhile, toss the pieces of beef in a little seasoned flour. Add the meat to the pan and brown, then add the tomatoes, wine and a pinch of salt and pepper. Gently bring to the boil, put the lid on and place in your preheated oven for 3 hours or until the beef is meltingly tender. Taste and check the seasoning, remove the cinnamon stick and rosemary sprigs and serve.


This was a very easy and delicious recipe made only better by the fact that shin is also an extremely cheap cut of meat at the moment, it is only around £4.50 per kilo. I hate the look you get that follows the pronouncement that you are a student and like to cook so many 'adults' slowly raise one eyebrow as if to say I don't call beans on toast cooking. This will then be followed up with whats you speciality spaghetti Bolognese. Ok so I'm a student so we eat on a budget but that doesn't  mean that we don't cook good food. We try to maintain a balanced diet fruit, vegetables and good meat. This does mean being canny with  the cuts you buy and I have recently discovered shin. A great alternative to supermarket stewing steak which has usually been pre cut into pieces far to small to cook for long enough to get tender without them disintegrating.

I fear that my photo does not do my stew justice. This must partially be blamed on stew, as stew never does looking as appetising as it tastes the attraction must be in the smell. More importantly though the photo was taken on my iphone not on some super swish camera. I must confess I'm a point and press kind of girl the camera consequently on my phone is all I have.
Posted by Lals & Alex at 10:54