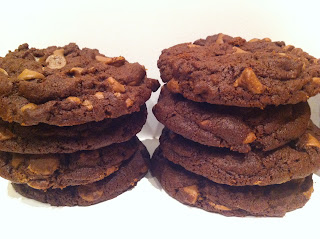 I have blogged about entering this event before, as I have been trying to perfect my attempts at cookie making in the lead up to the swap, they have never been my strong point. I was very pleased with the results in the end, I made double chocolate chip cookies from a Nigella recipe which worked perfectly. My biggest problem was defending them so that there would still be three dozen left to post. I wrapped them up like so in greaseproof and rafia. 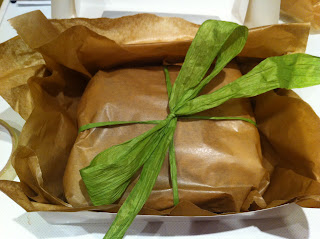 
Preheat the oven to 170°C.  Melt the 125g dark chocolate. Put the flour, cocoa, bicarbonate of soda and salt into a bowl. Cream the butter and sugars in another bowl. Add the melted chocolate and mix together.
Beat in the vanilla extract and egg, and then mix in the dry ingredients. Finally stir in the chocolate morsels or chips.


The recipe says that this should make 12 but I have always found that it makes more like 18. Place the dough onto backing trays about 6cm apart. Cook for about 20minutes. A skewer should come out semi clean. Leave to cool slightly before moving to a wire rack in order to firm up. 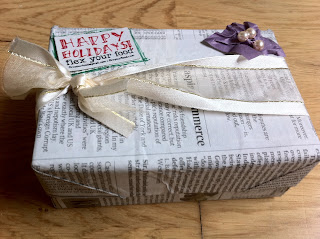 These were minted triple chocolate cookies. They were absolutely delicious but not what you were expecting at all when you bit into them. They were made with fresh mint rather than peppermint, which is a flavour I shall have to experiment with more. They were beautifully presented and survived the postage perfectly. They were sent by flex your food. 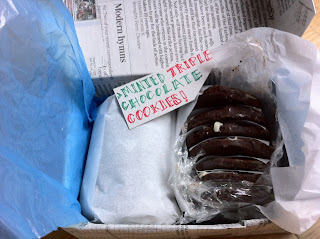 My last two batches of cookies arrived in the post today. Both survived their experiences of the royal mail delivery system and I must remember for next year that a pringles tube makes a very sturdy cookie container. The first batch did not contain any information as to what I should call them but I would describe them as a chocolate covered sugar biscuit. The chocolate that they were dipped in contained some kind of spices which left a wonderful flavour at the back of your mouth without being overpowering. I think it may have been chilli chocolate.They were kindly sent by Mrs Iles. 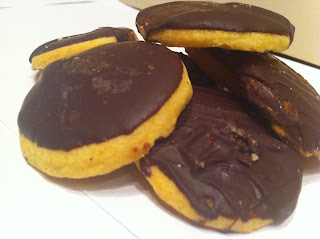 The final batch came from who was very worried that cookies were not her area of expertise she needn't have worried. They were yummy. They were white chocolate, macadamia and sour cherry. They were not straight flour but split with oats which made them feel healthier! They were kindly sent by Baking Making Etc. 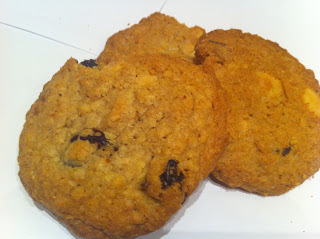 Email ThisBlogThis!Share to TwitterShare to FacebookShare to Pinterest
Labels: Biscuits