I must admit that I have been very bad about blogging recently. I thought that I would blog a huge amount whilst lodge cooking last summer, but when you are cooking four meals a day, seven days a week for three and half months the last thing you want to do is write about food. Not to mention that there was no signal at all and Internet was very hard to come by. Since returning from cooking I have been graduate job hunting and desperately trying to avoid all forms of procrastination. Something, which both blogging and twitter definitely qualify as. Then as more time passed it felt as though blogging again would either be admitting defeat on the job front or tempting providence.

As I have now secured full time employment in London pending contract shenanigans; now seems to be an opportune occasion to update my blog. I started this blog purely as an electronic record of my recipes in preparation for lodge cooking. However, now that I am about to embark on adult life as opposed to student living I feel as if I need to challenge myself to keep baking. Having contemplated cooking my way through a cook book aka Julie & Julia but I decided that not only will I not like a lot of what I would have to cook but I wasn’t sure how much I would actually learn. I have therefore decided to try and cook my way through all of the challenge bakes from The Great British Bake Off. This way I not only make sure that I keep baking once I am living on whilst learning a huge amount by having to try my hand at a variety of bakes.

As I can't promise that I will have time to bake every week I am going to try and commit to attempting a bake off challenge every two weeks. If you have baked any of the bake of challenges then comment with a link to you recipe and I will add it to my post. In time I will work out how to make a widget or something like that work.

The challenge from episode one series one of the bake off was a traditional Victoria Sponge cake. This is a basic 2oz ratio cake which I would presume that most bakers have made at least once. My Victoria Sponge actually won the village bake off which was held in aid of the Queens Jubilee last summer, I piped a the royal cypher onto the top of it.

The Victoria Sponge or Sandwich was named after Queen Victoria's who was fond of cake at tea time. According to the WI (Women's Institute) it can only be called a Victoria Spong if the filling is raspberry jam alone and the only icing is a dusting of sugar. However in our family a Victoria Spong always has not only jam but cream and own fresh raspberries as well. 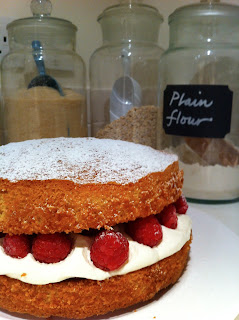 Pre heat the oven to 180C or 160C fan. Grease and line two 8inch round cake tins. Cream the butter and sugar together until pale. Add the eggs one at a time, then fold in the flour and baking powder. If the mixture is a bit stiff fold in 2 tbsp of milk to slaken it off. Divide the mixture equally between the two tins. Bake for 20-25 minutes until risen and golden. An inserted skewer should come out clean. Allow them to cool in the tins before filling with a layer of raspberry jam and whipped cream.