If you have read this blog before you will probably have noticed that I like to bake once I have finished my academic work. So you can imagine that the list of things which I have been planning to bake post my last ever final was pretty long. However, low and behold, sods law and all, the day of my last exam and our oven breaks. This totally curtailed all my baking plans.

The only saving grace is that the weather has been beautiful, so we have been gardening. Ever since we moved in our garden has resembled something like jungle. Fed up of not being able to cook  'I do have such an expressive eyebrow don't I' and I went out and bought a BBQ. Predictably as we walked out of the shop as proud new owners of a BBQ it clouded over. 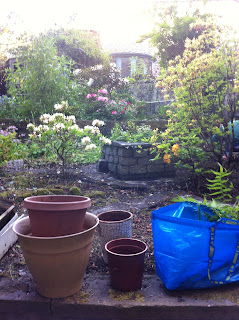 BBQ's and snow seem to bring out a cave man instinct in all men, 'I do have such an expressive eyebrow don't I' therefore insisted on assembling said BBQ. An hour and half later I was rather wishing I had done it myself.

Once said BBQ was assembled he insisted on being in charge of lighting it. This proved to be a bad idea as it swiftly went out, at which point I took over. 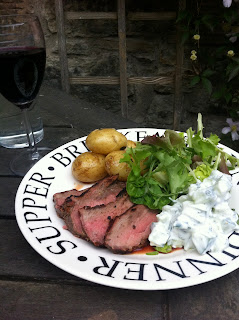 This is a recipe which my Father always cooks. It is not a very exact science.

Marinade the leg of lamb in all of the ingredients. It needs at least an hour but over night is best. Cook it on a BBQ for 14 minutes on the first side and 12 on the second. Only put it onto the BBQ once the coals have stopped flaming and are grey. These timings will give you slightly pink lamb. 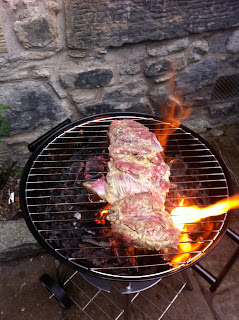 I have linked this up to Simple and in season over at How to cook good food.
Posted by Lals & Alex at 08:18