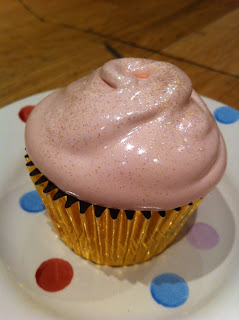 The basis for this recipe comes from the Primrose bakery book. I must admit that I have been really disappointed by this book so far but I am still reserving judgement. I am no going to bother posting the primrose recipe for the sponge as it was a pain to make. It involved three separate mixing bowls and folding in stiff egg whites. The sponge was not noticeably lighter and frankly didn't taste of much. The icing however really did work and would be a great substitute for fluff based icing used in whoopie pies as fluff is not cheap in this country.

Cook the sugar, golden syrup and water over a high heat until the mixture reaches the soft-ball stage 115C on a sugar thermometer. Remove from heat.

Increase the speed to medium-high and continue beating the mxture until it becomes thick, glossy and cool. Add the vanilla extract, if using, towards the end of the mixing process.
Posted by Lals & Alex at 07:42