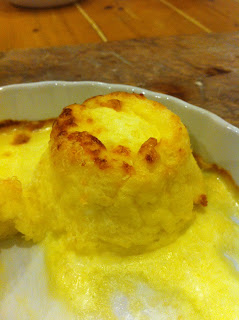 I have uploaded this recipe for Bebe. We have cooked together for years and both of us fortunately like cooking what the other hates. Cheese souffles are one of the things Bebe hates cooking so I usually make, unfortunately she is about to go off on a job where she has to make them three times in a week. She tried making them according to her mother's recipe and ended up with something which closely resembled puke. I unsympathetically laughed a lot, so here is a fool proof twice baked cheese souffle recipe. They are best made and eaten on the same day but do work if you make them a day ahead.

The photo is of a left over one so it has shrunk.

Generously butter and line the bottom of 6 ramekins or moulds. Make a rue with butter, flour and spices. Add the milk as you would a white sauce bring to the boil for a couple of minutes and allow to thicken. Stir in three quarters of the cheese and the egg yolks. Whip the egg whites to a stiff peak, fold into the cheese mixture. Fill your containers. Cook the souffles for 15minutes at 180C in a bain marie.

They should have risen considerably but won't be cooked through. When they have cooled turn them out on to an oven proof dish. Don't over cook them of they won't rise again when you reheat them. To reheat sprinkle with the remaining cheese, pour over the cream and cook for 7-10minutes at 220C.