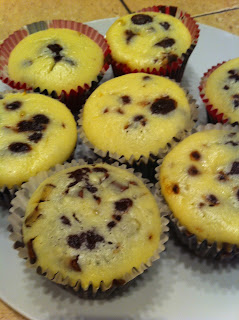 I thought that I would give these ago having tried one at my favourite haunt Cuckoos Bakery. I found the recipe which I followed on Mandy Mortimer's blog. Mine do not look like hers! I think the issue I came across is the cream cheese, here in Britain it must be softer than the American stuff. My cheese cake part pooled out as  a single runny layer over the top of the chocolate mixture rather than sitting as a lump in the centre of the chocolate batter. But they tasted delicious anyway even if they were slightly scruffy. I did find it difficult to tell when they were cooked as you had to stick a skewer through the cheese cake topping. 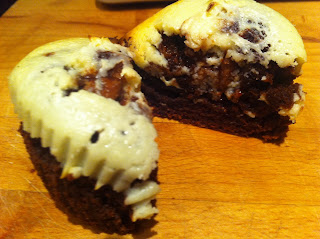 Preheat oven to 180°C or roasting oven with a cold shelf. This makes 12. Beat cream cheese until smooth. Add sugar, egg & vanilla then beat until combined. Mix in chocolate chips if you're adding them.

Sift together flour, sugar, cocoa, baking soda and salt. Make a well in the centre of the dry ingredients and pour the wet ingredients into it. Stir to combine and mix until smooth.

Email ThisBlogThis!Share to TwitterShare to FacebookShare to Pinterest
Labels: Cakes