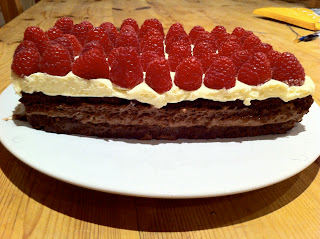 It was my flatmates 21st this week and I wanted to make something slightly more interesting than sponge but did not have a huge amount of time on my hands. We also have one friend who is allergic to wheat and another nuts. So I decided to start with a chocolate roulade sponge in between which I would layer up different chocolate mousses. chocolate roulade of swiss role sponges are a great one to remember as they have no flour or fat in them.

Preheat the oven to 180C/350F/Gas 4. Melt the chocolate slowly in a bowl over a pan of hot water. Allow to cool slightly. Place the sugar and egg yolks in a bowl and whisk with an electric whisk on a high speed until light and creamy. Add the cooled chocolate and stir until evenly blended. Whisk the egg whites in a large mixing bowl until stiff but not dry. Stir a large spoonful of the egg whites into the chocolate mixture, mix gently and then fold in the remaining egg whites, then the cocoa. Mixing in the spoonful of white may seem like a waste of air but it makes it easier to fold the rest together as the mixtures will now be a more similar constancy. Pour into the prepared tin and gently level the surface. Bake in the preheated oven for about 20 minutes until firm to the touch.
Chocolate mousse:

For the amount of sponge I had made I used 2oz and 2eggs. If I were to make this recipe again I would probably 1.5 times the sponge mixture and use three eggs. Not because there was not enough it easily fed 8-10, but because I was cutting it up to layer it. When you cut something down to size there is always an amount of wastage meaning the amount of sponge was quite tight. Melt the chocolate and allow to cool slightly. Then mix the egg yolks into the chocolate. In a separate clean bowl whisk the egg whites to a stiff peak. Fold the whites into the chocolate remembering to slacken off the chocolate as you did with the roulade. Normally you would now put the mixture into whatever you are going to serve it in and them into the fridge. If I were making this recipe for a pudding on its own the general rule is one egg and one ounce of chocolate per person.

I assembled it by cutting the sponge into two squares and layering in up sponge, chocolate mouse, sponge and white chocolate mousse on the top. I had to cut squares as I had not made enough sponge but this would have been much easier to do if I had had enough to assemble it in the ring of a cake tin. I would have got a much neater finish as the mixture would have had straight sides. I also finished of the top with fresh raspberries. I will definitely make this again as a smart birthday cake or even just as a pudding. It is quite rich so is probably best served as a pudding rather than as a tea time cake. You could easily use orange chocolate for the mousse and brush grande marnier into the sponge if you wanted to make it a bit different.
Posted by Lals & Alex at 03:59