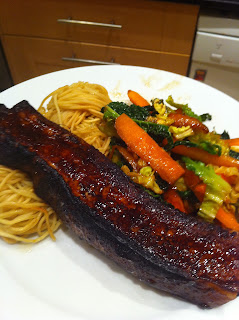 I was in the butchers getting my knives sharpened when I saw these ribs. They are apparently called thick ribs and were delicious; they have a much greater meat to bone ratio than spare ribs. This recipe would work equally well though with normal spare ribs. The mixture smells like the aniseed flavour from the star anise is going to over power everything else but once they have cooked the balance  is about right.

Put the ribs into  pan of cold water and bring to the boil, simmer for 15 mins. Meanwhile, mix all the remaining ingredients together in a bowl.

Drain the ribs very well, then brush with the glaze - if barbecuing, chill, cover and keep in the fridge for later. Otherwise put them under a hot grill for 15-20 minutes, turning every so often adding any left over glaze when you do.