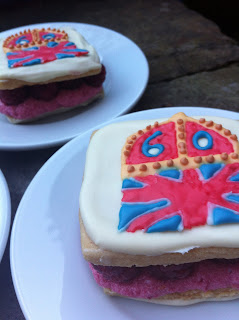 When Fleur over at Home made by Fleur announced that she was running a baking competition for the Jubilee I could not resist entering. Every cooking magazine or blog had been suggesting reams of ideas for Jubilee baking.

However they mostly seem to be cupcakes, victoria sponges with different coloured layers, iced biscuits or cakes decorated with appropriately coloured soft fruit. Don't get me wrong there is nothing wrong with the above, but I wanted to make something a little different for the Jubilee. I have been reading lots of american food blogs recently, which have been advocating piped royal icing decorations onto sugar biscuits. There were two things which put me off making these kind of biscuits. Firstly though these look amazing but I am always worried about how good they actually taste, kids love them the more icing the better, but for adults I always feel people prefer a slightly more dignified icing to cake ratio. Secondly having been an art scholar I always end up wanting to pipe a design way beyond my piping skills. And this proved to be no exception to the rule as I chose to try to recreate the Diamond Jubilee logo. 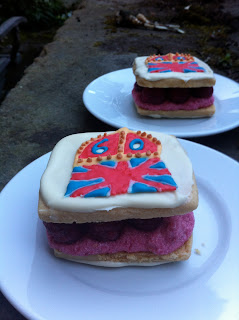 I therefore had a cunning plan, I piped my royal icing designs onto clear plastic there by allowing me to trace my pattern rather than having to work free hand. Once they were dry I carefully pealed them off and stuck them onto of my shortbread with a thin layer of white chocolate. I was initially worried that the white chocolate would be too sweet but having conducted a taste test it actually brought out the lemon flavour in the biscuits. 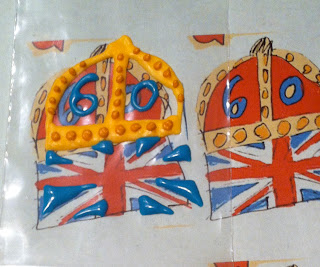 To make royal icing you mix icing sugar with egg whites until you get the required consistency and then add food colouring. For large areas you need to outline the area with a thicker icing and then fill it in with a thinner consistency icing some times know as flood icing. I made these with the same consistency through out.

For the shortbread, this supposedly makes about 30 4cm circles and I got 24 squares out if it.

Preheat the oven to 160C. Beat together the butter and caster sugar until it is light in colour and an even consistency.

Beat in the flour, salt, semolina and lemon zest, then knead with your hands to form a soft dough. Put in the fridge for about 30 minutes before rolling. It is easiest to work with when cold if you have shaped the dough into a pancake shape rather than a ball.

Roll out the shortbread dough until its about 1/2-1cm thick. Cut out as many biscuits as you can, re-rolling and re-cutting any trimmings as you go. Place on a couple of greased baking trays and bake in the oven for about 35-40 minutes until they turn lightly golden.

Beat the butter and icing sugar together until thoroughly mixed. Add in remaining ingredients. If you want a stronger colour you can add food colouring at this point.

To assemble cover the biscuits in white chocolate. If you need to assemble them a while before serving I would recommend icing both sides of the biscuits as this will stop the moisture from the filling making them sad. Next pipe a layer of buttercream, fill with fruit and complete with a second biscuit with a royal icing design on the top. I made larger ones as I used them as a pudding, I also trialled small ones which I stuck onto lolly pop sticks this worked equally well.

I have entered them into Fleurs Diamond Jubilee baking competition which she is running on behalf of Appliances Online.
Posted by Lals & Alex at 13:09