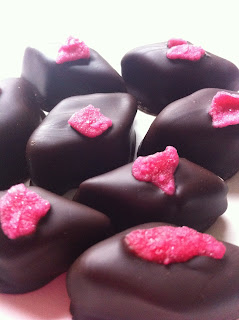 I have been meaning to try to make Rose creams for a while now, for a multitude of different reasons. Though primarily because they are my Father's favourite chocolates. I have read a number of different recipes but was unsure as to the merits of each. Consequently I dove in the deep end and experimented. Many of the recipes contained either both or one of, rose syrup or double cream. I was skeptical of the cream as I was worried that it might make them go off quicker and the syrup because frankly I can't find anywhere not on the internet that stocks it and who actually ever gets around to making a recipe where they have to source ingredients from the internet only to ever use a couple of tables spoons out of a large bottle. I therefore based my recipe on peppermints creams which would mean that I would only need the readily available rose water. It did mean that they were marginally crumblier in texture.

Whip the egg to soft peaks. Stir in the sugar and rose water, knead until you have a soft dough. At this point I added a couple of drops of food colouring. Form into you desired shape and dip into the melted chocolate. Before the chocolate sets add you chosen decoration. I got about 40 or so out of this quantity of mixture. be warned it smells overly rosey before you cover in chocolate but the rose is a delicate taste and needs to be definite enough flavour not to be over powered by the dark chocolate. This recipe would work as a base for different flavoured creams just use an alternative essence.

I have linked up with this months tea time treats, the theme of which is floral recipes.